We had 13 Descenders at the Alpine Ride today. 12 of us (Rick, Voris, Larry, Geoff, Yi-Shiou, Klaus, Matt Davis, Bernie, Guido, Steve, Garet, Oleg) met at 7-Eleven and Jeff Langley joined us at the top of SPP.

Unfortunately Jeff had a flat on the Slaughterhouse descent and since we couldn’t stop on 67, we waited on Vigilante/Moreno. After some waiting we decided to ride up and down Moreno to get more miles while waiting for Jeff, and after more waiting we decided to start riding. Garet soon had to turn back and Rick was riding solo because his knee was bothering him. We lost Guido just before Harbison Canyon (he just gave blood this week and apparently red blood cells are important for cycling. My theory is he is storing the frozen blood bags in his fridge to be used for Monster Climbs). Otherwise the group was riding together very well, with no stops, or regroupings. The pace was relatively mellow, no rapid accelerations or attacks, but consistent and steady.

We had a lot of fun on descent, Geoff making a nice fast breakaway. As we turned to Dehesa we saw descender jersey ahead of us – it was Jeff! He fixed his flat but kept descending on 67 so we missed him during our Moreno loops! He was as surprised to see us as we were to see him.

Dehesa was much cooler than I remember last month when we did the same loop. At the left turn towards Tavern Rd. we saw Guido, and when we arrived at the CVS store in Alpine we saw none other than Rick sitting on the curb. The gang was together once again. Matt had a slow leaking flat at the top of Dehesa but he made it to the store eventually too.
We descended towards El Monte and 8 of us decided to ride out to reservoir. It was windy so we established a beautiful and super-smooth paceline. After 14 miles of pacelining, it was time for me and Larry to part with the group – we rode from home, so we had to take a shortcut through beautiful Lakeside, Santee, 52 bike path and ever so scenic Clairemont Mesa Blvd. When we rode up 52 bike path Larry nearly rode over a giant rattle snake just baking there in the sun. It was the biggest rattle snake I have ever seen! Eventually we made it through Clairemont Mesa – by the time I got home I had ridden over 100 miles, and Larry must have had too.

Great day in Alpine, some photos are attached.

You should have come, 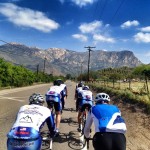 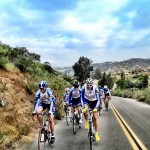 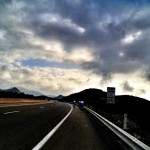 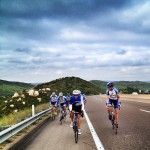 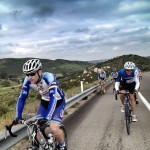 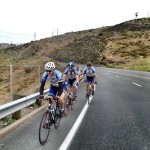 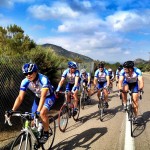 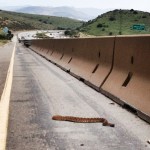