All, we had 14 descenders coming out for Soledad punishment. There was a bit of drama, as you see below (keep reading!).

I parked the car filled with coffee and food at the top of Soledad and rode down to meet with the rest of descenders. I met with a group of 10 on 56 bike path, just a few miles after they left the meeting place. The group contained Sheehan, Rob, Geoff, Rick, Jeff L., Guido, Bernie, Hodges, Farkas and Chad. Farkas was racing tomorrow so he only rode with us to the coast and continued north on 101. However, we picked up Larry Murray and Jeff Southerton on the coast, and a new rider, Randall (I think?), on Soledad, bringing the total count to 14.

The ride went as usual, with controlled climb up Torrey Pines (lead by Chad) and animated descent (lead by Sheehan) to La Jolla Shores.
Jeff Langley, or, I should say, Dr. Jeff Langley, as he just got a Ph.D. degree in ministry (Jeff is a pastor in case you didn’t know it already), had to turn back early since he had family in town to celebrate his graduation (congrats, Jeff!).

There was some construction on Torrey Pines as we approached La Jolla, which was annoying (as cars took over the bike lane). As we hit Hillside, Rick picked up the tempo and Larry, Chad and I followed. I survived Rick’s aggression long enough to show him the beaten path that runs parallel to via Capri (I did slow him down as I had to dismount the bike to get past the gate, which cost Rick the Hillside KOM or two I am sure – but he should get the KOM for the steepest Hillside section all the way to the Cross). As Rick disappeared in the distance, I went into my personal pain cave – I found Rick at the Cross, circling around the monument. Soon Larry, and then trio of Jeff Southerton, Chad and Rob arrived. Rob has been on fire lately, whatever he is doing, is obviously working for him.

We quickly regroupped and descended down Nautilus – Sheehan missed the turn and was the last man to start the descent, but was also the first descender to finish it. It was windy so the times were not super-fast.

We climbed up Country Club (Rick never did this climb before either, but after my instructions of “stay to the left all the time”, he took off and set a new KOM on the Countryclub Rd. climb – impressive!). We stopped to take some photos at the overlook.

After our second climb we stopped for civilized european-style coffee and pastry break at the top of Soledad, and then descended down La Jolla scenic. Here’s where we ran into some trouble:

As we rode through Bird Rock roundabouts, one of the car drivers (driving a gray Jeep 4×4 with CA license plate “NADIA 3”), driving next/just ahead of Bernie and Larry, followed by Rick, was driving erratically, deliberately cutting them off by periodically getting his car to the far right, next to the curb, and effectively squeezing them off the road. Bernie was riding behind the car, and yelled at the driver to get his attention. The driver then proceeds to immediately slam on the brakes, forcing Bernie to crash into his rear window. There were no cars or obstacles ahead and no other obvious reasons for him to suddenly hit the brakes, except to deliberately crash a cyclist with malicious intent. Other drivers behind called 911 and the police was on the scene within just a few minutes. The Jeep drove off at first but turned around and came back to the scene of the accident. A lot of people stopped to offer help. This was behind me when this happened and I got a bit of a shock when I saw a descender lying in the middle of the road in my rearview mirror.

Bernie suffered some nasty road rash and bruising on his back, as well as swelling of his thumb, but no broken bones. It could have been a lot worse! His was bike miraculously Ok as well, upon our quick inspection, just out-of-whack handlebar that got quickly fixed by Rick and a few scratches to the frame. Bernie was going about 15 mph when the driver slammed on the brakes.

The police officers to their credit took the accident very seriously and spent the next 40 minutes interviewing Bernie, Larry, the car driver and his passenger, documenting everything – very thorough job. The car driver (according to license plate holder, a retired air force servicemen and an EMT), however, did not appear to take the accident too seriously, claiming he just wanted to stop and pull over to the side to let cyclists go through – explanation that is beyond believable. No remorse about deliberately causing the damage whatsoever.

Once the police were done processing the paperwork we rode off to climb Nautilus. Bernie was feeling sore but good enough to continue riding. We climbed more or less as a group, then descended on the Soledad Mountain Road. Most descenders decided they have had enough of climbing for the day and went back to Poway through Santa Fe bike path, while Rick, Larry, Geoff and Bernie (yes, crash victim Bernie!) climbed Pacifica (where Rick entertained us by pulling a Sagan and popping wheelies practically all the way to the top) and then back up Soledad Rd to the Cross.
From there the group rode down Via Capri and up Torrey Pines to UCSD, while I went home.

A lot of climbing and some crazy adrenaline-filled adventures, but all is well that ends well. You should have come!

Jeff at the coast 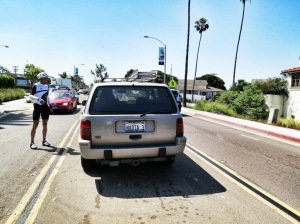 Larry talks to the driver

Chad on Via Casa Alta

views from the top of Soledad 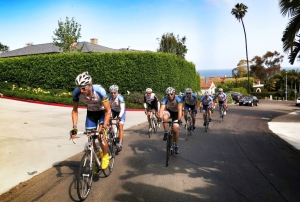 Rick leads the group on Hillside

Geoff and Rick on 56 bike path 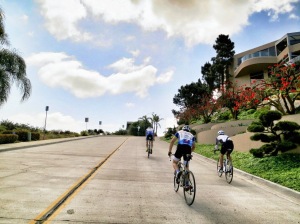 Rick attacks on Via Casa Alta 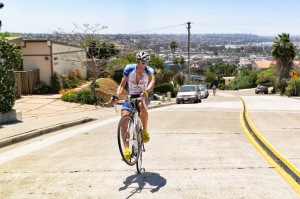 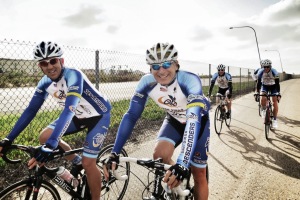 Rick and Guido at the front

Sheehan and Hodges on 56 bike path 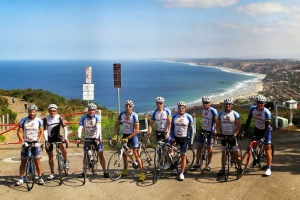