Once again I found myself in Bologna for two consecutive weekends and had access to a friend’s bike so I took advantage of the good weather and rode both Saturday and Sunday of BOTH weekends.  Rides are posted on Strava but a quick recap for those interested.

Saturday I met Nazareno, a rider I had met and befriended through Strava last May.  We arranged to meet for a big ride on Saturday (Aug 31).  We didn’t start until noon so we hit the heat of the day with temperatures in the high 80’s.  We road out the Zena valley and then climbed the well known Passo della Raticosa.  This is a 12km climb to the top of the pass from Bologna to Florence crossing from the region Emilia Romagna to Tuscany.  There were a gazillion motorcyclists out that day and many were sitting in the sun at the top having an espresso.  The ride back down the ridge through Mogodirho and Loiano was great and we finished the day with just over 100km.

Selfie atop Raticosa – about half way between Bologna and Florence 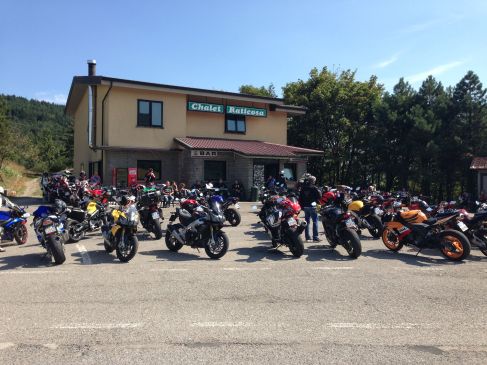 Motorcycles clogging the top of Raticosa

Sorry Toto, I don’t think we are in Emilia Romagna anymore!

Sunday Nazareno invited me to join his Club for a ride.  We met early and headed over to a small town nearby.  In the town center we came upon 50+ other riders milling about.  There was a locally organized ride so we joined for part of it.  Their club has some big guys and some old guys.  The oldest is 73 and in great shape.  Our group split from the organized ride route and headed up a favorite climb of his Club.  The road pitched quite steeply right from the get-go and had section of 15-20%.  At the top, some of his riding mates wanted to know how much I weighed – I think they felt I had an unfair advantage climbing!  We descended then did another short climb and concluded coming back through the Zena valley. 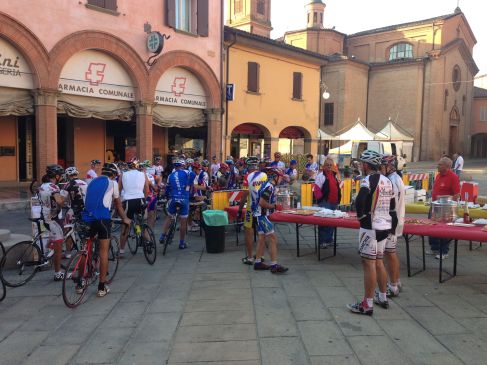 This weekend my coworker, Nicolo decided to join us, so Nicolo, Nazareno, and I headed out Saturday morning.  They decided to take me up the most challenging climb that starts right at the edge of town.  The road to San Luca church is famous.  It has a covered portico staircase to allow pedestrians to climb up to the church.  It was steep right from the start.  They warned me there was a section in excess of 20% after a switch back.  When I turned the corner I was not prepared for the length of the pitch.  I stood on my pedals with a slow turnover for 50+m but couldn’t maintain sufficient turnover and, for the first time, found myself having to side-wind the road to keep the momentum going for the second half of the climb.  Brutal but satisfying.  (Unlike Voris, I can’t take pictures of my trip computer while riding so you’ll have to look at Strava to see the gradient.  It is enough for me to stay on the bike.) We then stayed on top of the hills with a LOT of ups and downs and many more 15%+ climbs.  By 12 miles I was amazed how much up and down we had done and couldn’t believe we had only gone 12 miles.  We KEPT climbing planning to get to Monzuno.  With less than 100m to go on the final ascent to Monzuno we found the road blocked, closed to traffic.  We decided to go anyways thinking maybe it was passable by bike and we really didn’t want to go back the way we came.  After only about 200 meters we found the reason for the road closure. 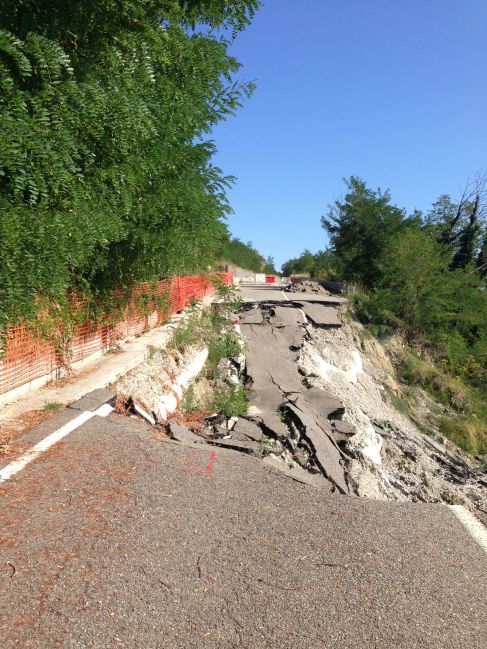 Total wipeout of hillside.  We managed to walk, carrying our bikes, on the concrete wall.  We then descended to the valley and road the rest of the way home.  48 miles and ~4900ft of climbing!

Today, I was on my own and decided to do one climb I had not done yet and retrace some roads I have done on other rides but in opposite directions. After the initial target climb was descending to Pianoro and managed to have a bee hit me in the forehead between my helmet and glasses.  He was there long enough to sting me in my eyebrow causing me sufficient pain to get really pissed off.  I knew I had a long 1-2% grade up the next valley ahead and was not looking forward to slugging it out alone.  Fortunately just as I turned onto the valley road a group of 11 riders went buy.  I was able to jump on the back and got a free pull by the group all the way up the valley.  The pace was animated but not brutal and I was happy for the distraction.  I left the group to take the 6km climb to Loiano.  I have done this climb twice before and today set a new PR!  Descended through Quinzano and Zena and headed home for a total of 54 miles.