Posted on February 3, 2014 by sddescenders

The recovery ride was hosted by Jeff Cresap today. We had a handful of riders join in a nice loop of RSF. The group met on the corner of Black Mountain and the 56 bike path. The small group included Jeff, John, Len, Bryan Jones, Claus, Bob P and Rob. Claus had been riding for almost two hours before we met at 8 am, he got in another century by the time his day was over.

It was colder at the start of our ride than it had been at the start of Stagecoach, felt like winter. We cruised along the bike path to Camino Del Sur and headed towards Santaluz. The downhill to El Apajo was colder still as we made our way toward RSF. Jeff led us along Los Arboles to the middle of town in RSF. We rode by the golf course and climbed back up El Mirlo, making our way toward Lago Lindo. A quick stop at the water hole and down then Mimulus.

We cruised back through town and headed west on Linea Del Cielo until we descended down El Camino Real to Via De La Valle. The pace was in control most of the ride and we regrouped when the tour roads got too confusing. It was still cool out but the sun was finally breaking through the clouds.

The group rode back east on San Dieguito Road and climbed up toward The Farms. We rode along Carmel Valley and Bob P split off for home at CDS. Cresap rode south past Westview while the rest of us rode to Black Mountain Road. Claus kept heading toward 4S while Bryan showed us a few PQ neighborhood roads back toward the bike path.

I got home with a nice and easy 36 mile recovery ride. We did not take any photos so here is another from the Soledad ride yesterday. This is actually the climb back up from Black’s Beach. You can now see why Bob P was not impressed in the earlier photo; great weekend of riding. 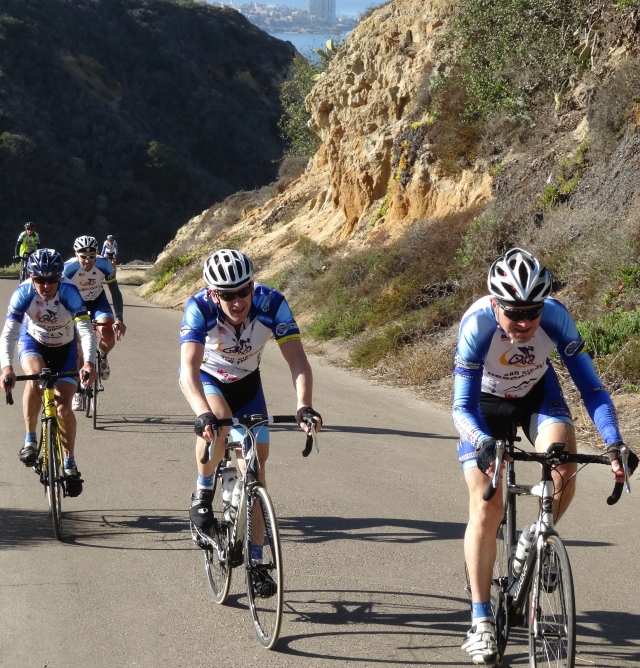