Descenders, we had a fantastic ride today.
The original plan was to do a coastal ride with a possible inland option to be discussed at a later time.

Larry and I rode from the coast – I think this was the first time we did this together since Monster Climbs. We got to the start at 7:58, and the group seemed to be very small – maybe 2-3 descenders waiting. But soon everyone swarmed in and we went down the bike path in a group of 15.

We had several new riders – Norm, who incidentally (and totally randomly and unintendedly) briefly participated in my Everesting ride this past Tuesday, Herman (who is from Austria – not Germany, it’s almost as bad as confusing someone from Ukraine with someone from Russia – Rob!), youngsters Zach and Tony, as well as many regulars. Mike Farkas showed up and he even wore the Descender jersey – nice! (see photos below for proof).

We also had 3-4 additional riders serendipidously joining us on the coast, including a legendary KC Butler, director of Tour of Poway (Nick Venuto century). How many Descenders are doing it? It’s coming up soon, September 28th!

And now for Public Safety Announcement from your "Mom":
We should really take it real nice and slow on 56 bike path, especially the western portion – it’s narrow and it’s an accident waiting to happen the way we ride it, in large group at 20mph+. Today the speeds reached 28mph on the most dangerous, narrow sections (yes, I did check and strava doesn’t lie!) which is frankly, irresponsible on those paths.
Let’s take it real slow (<15mph), or else go through Carmel Valley Road. Save the power for the climbs or powering on the front along the 101.
It is a bike path and all it takes is a child on a tricycle or someone jogging with a dog on a leash to cause some serious injuries.

We had some animated pulls along the coast, Farkas leading us up Del Mar mini-climb, and Larry doing super-pull on San Elijo – this was really fast as I was doing 400-700W (for those who don’t know much about power – this is A LOT!) just to stay in the draft!
Rick pulled away from us past Encinitas and he was gone. We took it moderate pace all the way to Oceanside, Farkas taking the sprint in the Harbor after long and strong leadout by – who else – Larry.

From Oceanside we split up – about half of the group went back the usual way (coastal, then RSF), while 7 adventurous souls – Larry, Zach, Bernie, Rob, Sheehan, Tony and yours truly, decided to go inland. We rode along the Oceanside bike path, then went over to Sleeping Indian (a steep and beautiful climb), descended down Moro Hills and Olive Hill – fast, fun and scenic descent, and then went back through more "familiar" roads of Camino del Rey and Champaign. It was getting hot! Probably low 90ies (my Garmin said 107F so subtract 15F).

We decided to go back the shortest way, via Escondido (Centre City Pkwy) – now I remember why we don’t ride through there very often.
Riders peeled off one by one as Larry and I did our part of doing another 20 miles of so from Poway to the coast – 110+ miles for Larry and myself with 5K ft of climbing.

You should have come!
Oleg 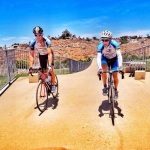 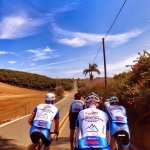 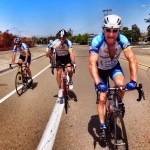 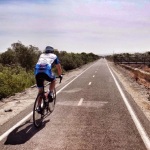