All, we had ~12 Descenders riding yesterday. Plus Chris Horner.
Larry and I made it to Springmeadow (riding through the fog) but nobody was there (according to strava flyby, Voris and Proulx were riding back and forth on nearby Sabre Springs at the same time, but we missed them).

At 7-Eleven we had 8 riders, joined by Guido, Tony, Sheehan, Proulx, Voris and Farkas. Voris didn’t want to ride in the heat and suggested last minute change to Mussey, but we had our sights on Alpine, besides we had a number of riders counting on us doing the Alpine route.
As we rode towards SPP we picked up Zach who informed us that Hodges was up the road – he wanted to go easy after yesterday’s ride we did to San Clemente.
Sheehan’s Di2 was ghost-shifting and he couldn’t use his 27 cog, but he managed with 24.

At the top of SPP Voris, Zach and Farkas turned around, reducing the group to 6 riders, just 3 miles or so into the ride!

We had a lot of fun descending on 67, and Sheehan led the way, including on the climbs, despite his mechanical, err… electronic issues.

Proulx turned around as we got to Lakeside, leaving us a group of 5. We rode together to Dehesa, with Sheehan again leading on downhill. Sheehan went at his own pace uphill due to his reduced gearing, while the four of us – Larry, Guido, Tony and I – rode up together at a steady pace, chatting and having lots of fun. This was the first time 80% of the group rode together up Dehesa – and Tavern. It wasn’t all that hot – yet. We stopped at CVS where we found Hodges who just pulled into the lot himself. After refilling the bottles we headed back, trading some animated pulls that dropped Hodges.
The four of us continued to El Capitan while Hodges and Sheehan went to 7-Eleven and then back 67. At 7-Eleven they ran into Chris Horner who was gracious enough to pose for some photos. Apparently he is aware of Descenders, and Rick Bienias, as the only other rider who is close to Horner on South Grade Palomar strava segment.

It was very hot on El Capitan, but thanks to some strong pulls (predominantly from Larry) it was a matter of hanging on to wheels. Larry and I rode back through Santee and 52 bike path. On 52 bike path there is a new Ghost Bike memorial for Paul Fleck, a rider who collided with another cyclist on the 52 path back in May and died from sustained injuries earlier this month. Freak accident that is a reminder how dangerous going fast on these narrow bikepaths can be sometimes.

100 miles for Larry, myself, as well as Tony and Guido. Jeff L., Mike Hodges and Bryan also did 100+ milers on Saturday or Friday, so plenty of long distance.

Reminder that Labor Day Coronado ride is from my house tomorrow at 9AM, see you there! 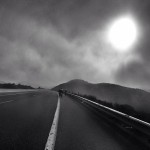 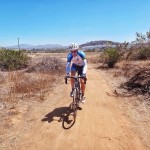