Descenders – We had a great ride up Old Julian today!
When I showed up at Spring Meadow, there was nobody there and I
thought I was going to ride alone to the meet point (would have been a
first), but then Hodges rolled up. Hodges rode part of the Ride Across
California with his kids yesterday, and accumulated more than 100
miles with a lot of climbing in Julian and Ramona just on Friday
alone. At Pomerado Rd. we ran into Jeff Cresap, and then met up with
Matt Babb, Bob Proulx, Rob, Sheehan, Klaus and Bob Raibert. Rob just
drove from Colorado through the night, arriving in San Diego at 4AM.
However, he was full of energy – he was first to the top of HVR,
showing some good form, possibly from elevation training. He seemed so
rested, I demand that he should drug-tested after the ride. We rotated
nicely after Bandy Canyon descent, and for the most part climbed
together as a group, into the headwind, up Ramona Grade. Klaus gets
the “Jens Voigt” award for setting the hard pace on the climb, and
keeping the pace up despite obviously suffering.
Things got a little animated towards the false-flat section of Ramona
Grade, with the three of us (myself, Matt and Bob) separating from the
group a bit, with Proulx and others chasing. Proulx has been traveling
a lot and has been running in UK, France, Italy, Germany and maybe
some other countries that I am forgetting right now, as well as recent
trips to Boston, San Francisco and other locations in US and abroad.
His cycling form was very impressive, given lack of cycling. When we
got to Ramona we broke up – Proulx turned back and descended Ramona
Grade, while Raibert and Sheehan went back through HVR – Bob helped to
pace Sheehan through some sections, with Sheehan setting a new KOM on
HVR descent, 21 seconds ahead of Logan who held KOM before, for an
average of 33.4mph, topping out at 54.5 mph!!! Don’t try this at home,
folks.
Four of us, Matt, Klaus, Hodge and myself, were lead by Jeff and Rob
on what could only be called “Easter Egg Hunt” for new roads leading
to Old Julian, through San Vicente and Vista Ramona Roads. The
“shortcut” wasn’t pre-authorized by the route committee, but being an
excellent salesman, Rob convinced us it will be worth it – fun roads
with fantastic views. There was a lot of “left turn-right turn-left
turn” and we only got semi-lost once (thanks to Jeff who steered us in
the right direction) – not bad for exploring new roads. Rob and Jeff
looped back home when we got to the Old Julian turn, leaving the four
of us to explore Old Julian – this was first time up Old Julian for
Matt and Klaus. We kept the pace steady into the wind, and then
enjoyed a super-fast, tailwind assisted descent down into Ramona. I
was surrounded by high-mileage folks – Hodges did 100+ miles just
yesterday, Klaus routinely does 150 miles of just commuting every
week, never mind weekend rides, and Matt has been averaging 270 miles
a week for the past few weeks – while I was averaging only about 50
per week. By this point it was also quite warm, 86F according to my
Garmin. We refilled our bottles and kept on going to Dye Rd. and HVR –
a lot of kids were out for Easter Egg Hunt, and overall it was a great
day to be out riding. We split up near the top of HVR, with Matt and I
hammering a bit and separating from Klaus and Mike, but we were almost
home. My Garmin battery died on return down Pomerado, but I ended up
with about 80 miles,4500 ft climbed.

Photos attached (also at http://goo.gl/kLKh8) You should have come! Oleg. 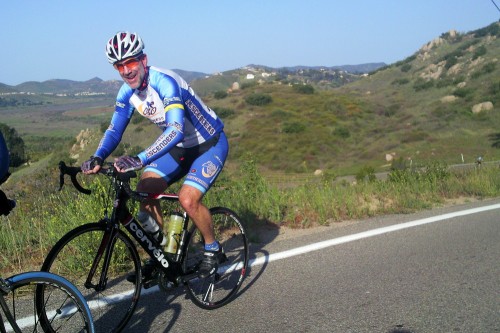 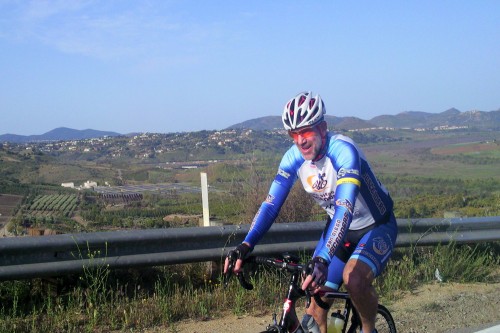 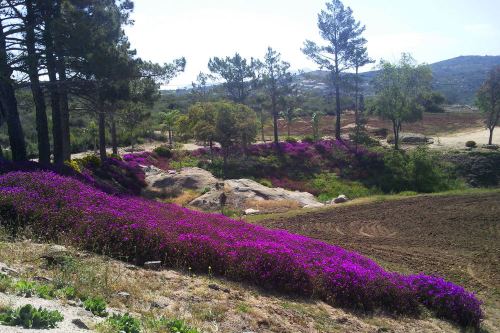 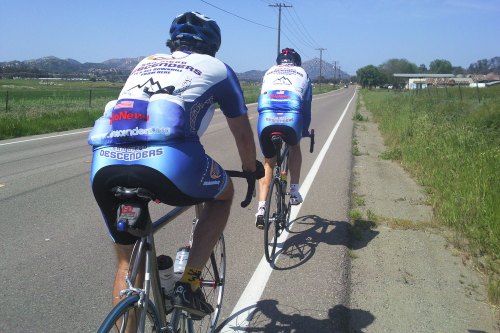 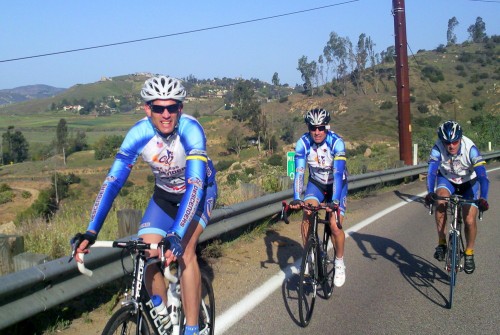