Some of you, or is it just Rob(?), wanted to hear how the Del Mar Triathlon went on Sunday morning.

A quick reminder the Del Mar Tri is a short, and "reverse" event at 5k run (maybe less), 15k bike, and 200M swim (8 laps in the pool). It’s family oriented and lots of newbies attend given the vast number of steel beach cruiser type bikes in attendance. Of course that didn’t stop several entrants from bringing their $10k carbon spec Tri bikes, and wearing skin suits. Quite the contrast. It’s limited to 275 entrants (plus additional 5k only runners). For the Tri 128 men attended, and 102 women, for 230 actual attendees.

I did a longer, but still short, Tri a couple of years ago at Camp Pendleton – and comically barely finished the opening 500M swim. My only previous Tri.

Next is the transition area among the 230 bikes to retrieve my bike and gear. This is where it gets hilarious. Even though I’m gasping for air after the run, and my legs are a bit shaky, I still run among the bikes and yank off my shoes, put on the bike shoes, helmet, and glasses, and take a quick swig of water. My chip gave me a transition time of 1:21. Well that is the second slowest transition time among the top 30 finishers – slow! The top 15 guys took about 40 seconds. I don’t get it. At 1:21 my transition time is 75 out of 128, and 9 out of 15 in the AQ. So bad.

The 15k ride left the campus and headed south, dived down the curvy 17% grade (dangerous) below HWY 56, then turned left on the HWY 56 bike path. A modest 500′ climb ensued for a few miles up to the Camino Ruiz turnaround. With my clip-on aero bars on my Felt I get a good rhythm going, while wearing my board short swim trunks and a tee shirt – ok it was one of those "performance tee’s" at least. Riders are few and far between at this point on the outbound route and I manage to pass a few. The out-and-back return route is mostly downhill with lots of riders now headed the opposite way but everyone stayed on the proper side of the cones so all good. I may be a bottom-half Descender but in the (short) Tri world that’s not the case it appears. My sub 30-minute time put me 13 out of 128, and 3 out of the 15 in the AQ. Proving that running and riding use different leg muscles, or thereabouts, the suffering from the run didn’t impair the leg strength much. Nobody rode around me on the bike.

After the ride another transition area to unload the bike and gear, pull off the shoes and the "performance" tee, and hit the pool. How long can 200M take – a few minutes? After 3 laps (8 total) I’m in trouble, and that’s after I deliberately ease off. Laps 4 to 6 are a suffer-fest, but how bad can it be in a heated pool? I end up getting passed by 2 (or 4?) other swimmers. So much for blowing by riders in the previous leg on the bike! By now my form is gone and I’m spending more energy flailing that actually moving forward – whatever just finish. Out of the water, finally, and across the finish line. Yeah! The swim results: a time of 6:12 for 200M, or 60 out of 128, and 7 out of 15 in the AQ. Michael Phelps I’m not. By comparison, the overall finishers near my overall result did the swim about 2 minutes quicker, and several had sub 4 times. Oh well. 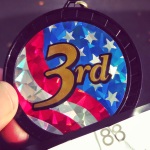