Descenders, today we had a nice post-Thanksgiving ride to burn off some calories consumed over Thanksgiving dinner. For me this was the second ride longer than 5 miles in a month, so it was nice to see the guys again and ride at somewhat leisurely pace (for a change). I rode over to 56/BMR meeting spot leaving the house at 6:30 – the forecast called for a warm day so I dressed lightly but on the ride over I dipped into two different canyons with recorded air temperature of 43F, which was a bit too chilly for my fingers, ears and toes – even if only riding through those cold areas for a 5 min at a time.

I met John M. and Rob, and soon Guido rolled in. Rob was only going to ride a little bit and then loop back. We rode to the coast and picked up Larry at I-5, just after Rob peeled off to go back. The four of us rode together steady with minimal regrouping or breaking up, except for a brief stop to examine John’s shifter that stopped working due to broken spring – John figured a way to make it work temporarily and we were off again.

It was a great day on the coast, nice sunny and warm. We stopped at Carlsbad for coffee and pastries, somewhat defeating the original calorie-burning plan – but it was nice to sit down like civilized people and chat.

On the way back John showed us an awesome bike path shortcut that bypasses a lot of busy stops through Carlsbad – we should adopt it in the future! At La Costa we decided to keep going along the coast, again, with no regrouping needed – John and Guido turned towards 56 bike while Larry and I continued along the coast back home.

I got 78 miles and haven’t burn any matches, saving some for a ride tomorrow (in case you forgot, tomorrow we go up HVR to Old Julian).

Great day to be riding while most of East Coast is covered in snow.

You should have come. Photos below. 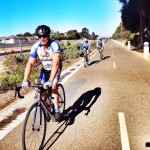 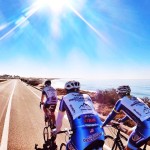 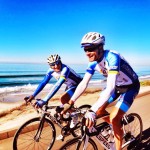 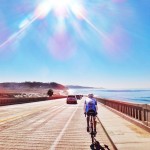 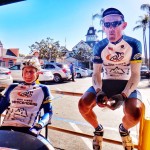 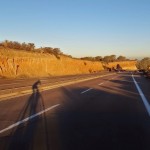