It was another beautiful San Diego morning as I pedaled over to meet Bob P in 4S and then onto the group meeting spot–the start of HVR. We met up with Tony, Todd and Len while we waited for Sheehan to show. He came just as I was about to call him. Dave & Tony seemed to know where we were heading so everyone pedaled off along HVR with Bob, Sheehan & Todd out front. At the climb Todd and Bob took off while the rest of us pedaled up to regroup at the corner of Bandy. I was still feeling tried but managed to hold off Len to the corner with Tony just behind. Tony is riding super strong, especially given his treatment regiment. he is a warrier.

I sped out from the regroup to fly down Bandy Canyon. Right before the first curve Tony flew by me but I hung close. We obeyed the yellow line and sped down the hill with others in hot pursuit. Sheehan & Todd came first with Bob and Len closing the gap as we sped along Bandy Road. It is so green everywhere still from the early rains, some gorgeous views were had. We rolled to the end of Bandy and turned left onto Hwy 78. Sheehan & Bob took most of the pulls with Todd helping too. I was hanging onto the back watching the mesmerizing weave of Len. We took the turn to Old Milky Way and made our way toward Summit.

Sheehan told Todd and Bob that the climb was only 0.7 miles so those guys took off with the rest of us fading, but giving chase. Tony and I swept with me even farther back. The climb is about 1.5 miles so Bob and Todd were none too pleased my the time I rolled to the top. Sheehan was sure I was having a medical issue and suggested a full physical. I was just tired. We cruised down the curves of Summit and back across 78, eventually making our way to Citrus. We rode to El Norte Parkway and looped onto Ash back towards Broadway and to Jesmond Dene.

Bob led out a strong pace up the hill. I hid on his wheel for the first half of the climb and then hit the accelerator. I gapped the guys but it was hurting. On the last pitch climb Sheehan closed the gap and passed me. I still set a PR for the full Jesmond Dene segment, a road I have ridden a dozen times. I still had a bit left! We regrouped and went south towards Escondido on City Center Parkway and made our way to Grand Ave and our planned coffee break at A Delight of France. Sheehan had called ahead to make sure some Almond Croissants were left. This is a very cozy place with a nice porch to watch the folks stroll by as we enjoyed the coffee and especially the almond croissants. They were delicious. We spent a good amount of time relaxing and enjoying the late morning.

We eventually had to get back on our bikes and pedaled back towards Bear Valley and the mall. We bid adieu to Tony and rolled across the the Lake Hodges Pedestrian bridge where Sheehan & len went left while Bob, Todd and I went right. Todd left us as we climbed towards RB Road. Bob turned towards his home while I was finally able to get into pootle mode and ride behind Black Mountain and home; 60 miles and 3,600 of elevation. Great fun. I have attached a few photos and attempted to attach a url to see the photos in picasa, ala Oleg. Might not work, still learning.

The usual suspects for the Skive Rides were bailing left and right. Sheehan had a meeting, Hodges cancelled that morning, Jeff L had a doc appt and Bob P could not spend the time. I was not motivated to ride over alone so I drove to the trail parking right by the start of HVR. Tony got there just as I drove up. KC Butler was waiting at the corner. KC is the long time organizer of the Tour de Poway and has ridden with us a number of times. This was his first full Skive ride. Despite my many suggestions of dirt and steep routes, Tony convinced us to do the same route as the week before–Deja Vu. It was a cool but sunny day and another great morning to be on a bike.

We pedaled over the HVR…you know the rest–same as above…..

I texted Hodges our time estimate of getting to A Delight of France, Jeff L too. KC flatted along Summit so I had time to give them the heads up. KC bought us coffee and an almond croissant to split, again it was delicious. Hodges showed and he bought another croissant. I will need to ride more to burn off all these croissants! We again enjoyed sitting on the porch and relaxing in the early afternoon. We eventually left Hodges at the cafe and rode the same route as above. We waved good-bye to Tony and rode over the pedestrian bridge. I rolled to my car while KC kept going south on Pomerado. It was only a 38 mile, 2,000 foot ride but loads of fun. I have again tried to share some photos via a link. If that fails, I will ask Oleg for more training.

coffee at a delight of france 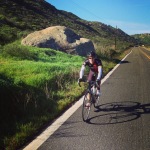