Posted on October 5, 2014 by sddescenders

There were 17 descenders who came out to brave 100-degree temperatures on yesterday’s ride. There was rumors about canceling the inland ride and instead going coastal but in the end the "hotter" heads (hot heads?) prevailed – we did the ride as intended, except reversed the order of things and did Pamo first, while it was still not as hot, followed by Mussey.Larry and Rick W. had a bit of fun with two random riders who tried to push the pace up SPP, eventually dropping both of them.
Sheehan had a mechanical, I mean – an electronical, problems with his Di2 and was forced to climb Woodson in the big ring – he turned back. Ernst also turned back as he had be home early. While Rob, Neil and I were trying to figure out Sheehan’s problems at the top of Woodson, the group took off and we were gapped behind, desperately trying to catch on. We closed the gap in half on the descent, but then I could see Rick B. going to the front, and knew immediately it was hopeless. We split up into three groups on Dye road but regrouped again as we approached Ramona. Bryan had to turn back, the rest of us rode to Pamo – it was still not that hot. Even the climb was not so bad. Eileen QOMd on Pamo climb, and Rick took one of the Pamo climb segments, but missed out on another one by 3 seconds, still held by Neil. Most of the leaderboards (uphill and downhill) are heavily dominated by Descenders now.
Rick has not been on the bike much lately, but apparently his ElliptiGo cross-training is paying off.

We did a nice rotating pace line on the way back Dye, with two Ricks contesting the sprint at the end (Rick B took it). We decided to ride Mahogany Ranch first – we don’t do it often because it requires substantial time for riders to forget just how steep and painful that climb is. Strava claims the top gradient reaches 27%, I am not sure about that, but it’s certainly well above 20% in a few spots. My 39×28 gear was just barely sufficient to keep pushing the pedals, and I was envious of Larry’s compact/wifli combo of 34×32.

On the way down, a few of us (Rick, Neil, Larry and I0 opted to go back home – because of Miramar Air Show road closures, we had to take a detour back home. It was getting hot now – my garmin was consistently showing 111, which is a lie, but I never saw numbers that high.

Larry and I made it home with 90-something miles and 6,000ft of climbing. Claus, who started riding around his house at 6:30 got 102 miles in on a very hot day.

After the ride most of us also attended the fantastic party at Bernie’s. Thanks, Bernie!

You should have come (to the ride and the party)!

A few photos below. 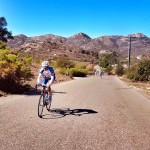 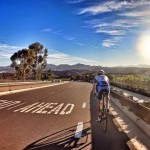 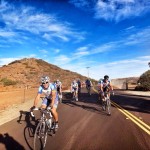