Descenders,
(reminder to submit your guesses to Photo Contest #4 by tonight!)

we had 16 riders on our Oceanside Ride yesterday.

It was 39F when Larry and I met at Rose Canyon but it warmed up quickly – in an hour or so it was in 60ies or even 70ies, and by the end of the day it was 80+F on the coast.
It was quite a windy day – on the 56 bike path we had to dodge giant tumbleweeds (see photo below from Paul Pruschki) – I never saw that before. Larry and I also had to dodge about a thousand Carmel Valley 5K runners that took over the bike path. So when we met the group we took detour via Carmel Valley Road and Del Mar Heights.

I think we should use this route from now on – 56 bike path is one of the most dodgy, ridiculously dangerous segments we ride on, especially when we do it as a group of a dozen or more, barreling down at 20+mph – with runners, walkers, strollers with babies, dogs on extendable leashes across the entire path – most obliviously wearing headphones (sometimes even dogs and babies!).

No matter how hard we try, we can’t keep our speed under 16mph on a narrow path, so we might as well go to the safer bike lane while sharing the road with the cars.

Speaking of cars, the drivers were extra aggressive yesterday. There was an SUV driver that tried to buzz us (deliberately, I am sure) as we approached Carlsbad – we caught him at the light and let him know how little we appreciate that style of driving, and there was a super-irate and erratic Hyundai road-raging driver in Oceanside that kept hitting the brakes as we were riding right behind him and turning without signaling, and when he was called out on this behavior, he pulled over and got out of the car to yell some obscenities at us – luckily we ended up going our separate ways without any incident.

The pace was mostly steady, without any major surges. The only exception was the sprint in the Oceanside, which was contested between Larry and Sheehan, but Sheehan may have gone a bit too early and Larry out-pursuited him.

We lost a few riders on the way to Oceanside and then a few more on the way back. Rob got an unfortunate flat in RSF – we hoped he would catch up as we did Stud Loop but he and Hodges appear to miss us by a few minutes. We parted ways as we cllimbed 3 witches. I had a bell on my bike and kept ringing it as we passed numerous cyclists and runners on the bike path and 101, and it made us hungry for ice cream. So Larry and I stopped at 7-11 at Del Mar to get some ice cream. Nice!

I had 100 miles by the time I got home – not much climbing but a lot of riding into the wind (or with a tailwind), which always makes for a nice workout. 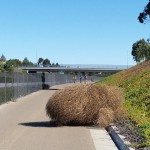 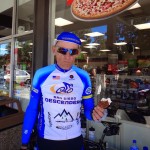 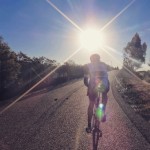 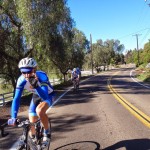